Arizonans for a Just Democracy is an independent expenditure PAC focused on electing candidates who commit to protecting democracy and voting rights. We believe that all Arizonans have the right to vote easily and securely, and that increased participation in elections strengthens our system of government and our country.

PHOENIX – Today, Arizonans for a Just Democracy, a new PAC supporting candidates who pledge to protect and expand voting rights, launched their effort to educate voters about what’s at stake in the 2022 elections and announced their first endorsement: House Democractic Leader Reginald Bolding for Secretary of State. Arizonans for a Just Democracy is committed to ensuring that Arizona has a Secretary of State who will uphold American democracy, commit to conducting and certifying elections fairly, and values the will of the voters above politics.

PAC Chair Grecia Lima announced the PAC will work to elect candidates focused on protecting democracy, saying, “At a time when Arizona Republicans are launching a full-scale attack on voting rights, conducting a sham audit to weaken confidence in our democracy, and Congress has failed to pass the For the People Act to protect our democratic system from voter suppression and gerrymandering, it is more important than ever that Arizonans come together protect our institutions and create a just democracy for all. That starts with electing candidates who pledge to defend the rights of voters and the integrity of our elections.”

Lima continued, “With our very democracy at stake, we need a Secretary of State we can trust, who believes in counting every vote accurately, and ensuring that every Arizona voter can vote securely and without barriers. Reginald Bolding is a proven leader, who has worked to expand voting rights and strengthen election administration in his role as a State Representative for years. Arizonans for a Just Democracy is proud to endorse his campaign.”

Arizonans for a Just Democracy has raised $350,000 to date and plans to continue raising funds to educate Arizona voters about the power of the Secretary of State and hold candidates accountable to their commitments to the voters.

Democracy Under Attack in Arizona

Arizona has become the national epicenter for the right-wing effort to overturn the 2020 Presidential Election. The Republican-controlled Arizona State Senate empowered a group of inexperienced, pro-Trump consultants to conduct a sham recount, in hopes of proving the myth that Trump won the state in 2020. Even Republicans in other states are likely planning to copy this move – Pennsylvania legislators visited Arizona to learn about the “audit” process.

After losing an election, instead of changing their platform to better appeal to voters, Republicans are trying to cling to power by manipulating the voting process and disenfranchising voters—mainly people of color—who might disagree with them. This year, they passed SB-1485, which removes people who haven’t voted in the last two general elections from the Permanent Early Voting List, making the list no longer “permanent.” This will purge more than 100,000 voters from the list, creating confusion and more barriers to voting for vulnerable communities. 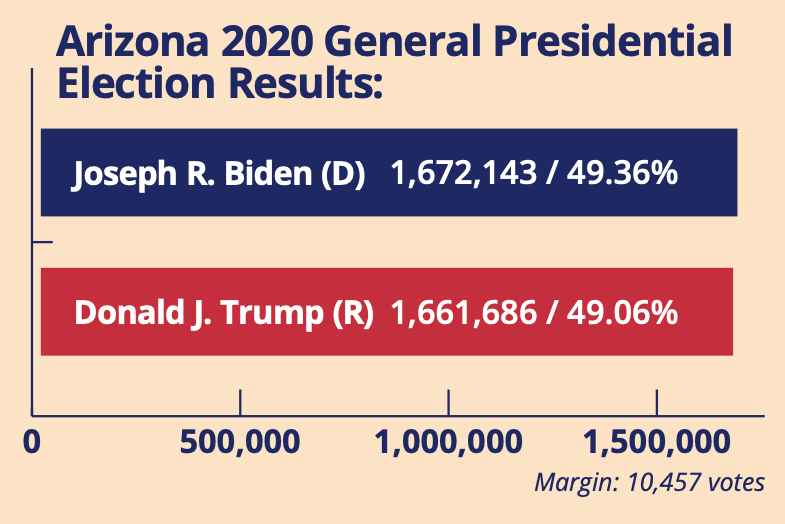 The 2022 Secretary of State's Race

Republican attacks on elections and the institutions of our democracy will likely continue into the next few cycles. Arizona is a swing state; President Biden won it by less than 11,000 votes. If a right-wing Secretary of State wins in 2022, it is possible they will attempt to undermine the will of the voters and over the results in 2024. Given Arizona’s close margins in recent cycles, that leaves a dangerous temptation for Republicans to further undermine our democracy.

Secretary of State Katie Hobbs recently announced she will run for Governor in 2022, leaving behind an open seat and a highly competitive race for Secretary of State. As Secretary, Hobbs has been a key voice of reason both locally and nationally, exposing the Republicans’ sham audit for what it is. Having a Secretary of State who is committed to the legitimacy and public trust of elections is crucial for the health of our democracy—holding this seat is an absolute imperative.

Given this environment, Arizonans for a Just Democracy is committed to ensuring that Arizona has a Secretary of State who will uphold American democracy, who commits to conducting and certifying elections fairly, and who values the will of the voters above partisanship or party. We plan to educate Arizona voters about the power of the Secretary of State and the positions of candidates for the office, and hold candidates accountable to their commitments to the voters.